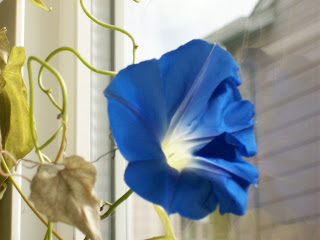 My mind has been on Spring lately. The weather here has been such a tease. The sun coming out and the temperature warming up one day, and the rain, clouds, and wind coming back with full force. It is funny watching my students try not to be distracted by the weather outside. Sun or rain.

Thursday before last it was particularly difficult to keep them on task because we had a full on lockdown of the school. They wanted to know what was going on and if there was any scary person in the halls coming to get them. We had to explain that they were safe and we were very confident that nothing bad was happening. We reminded them of a previous lockdown where we couldn't let the kids out due to a chemical accident and air impurities from a factory not to far away. 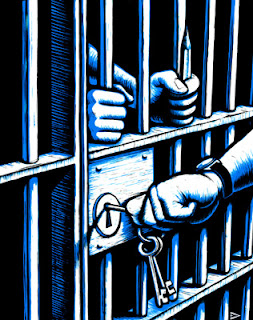 When we locked our doors and closed the blinds it was a nervous moment. I'll admit I had a moment of fear trickle down my back accompanied by images of Thurstan High and other school shootings. Working in a title one school we have some pretty tough kids. I doubted that any of them would do something terrible, but then so did the other teachers of the kids who did.

Turns out my fears were for naught. Though I did text my husband to let him know what was going on. What really happened was some crazy guy on drugs was walking down the sidewalk on the other side of our fence..... wait for it .... completely nude. It was very cold outside, even though the sun was shining and there weren't any clouds to be seen. The brilliant blue sky making for an interesting contrast to the cold temperature. At any rate the guy was collected very shortly by the police.

When the lockdown ended and we opened our blinds we were greeted by the scene of four police cars, two cruisers and two SUVs kitty corner to our classroom. Apparently they weren't quite done with whatever they were doing. I didn't notice them at first, but when I saw that some of my kids kept looking out the window, I grew concerned. So I looked out too. Next to the police cars were about six police standing around in someone's front yard looking down. At that point I grew proactive and closed the blinds again.

Thank goodness the police around here are on top of things. OH and I guess none of our students saw the naked man, only a few of the aides who had been outside on recess duty for some kindergartners. The second they saw the man they pulled the kiddos inside, pretending that recess was over.

On the teaching math front... my kids have been doing fairly well. Though one of two of them don't seem to be getting it at all. It seems like no matter how carefully I teach and reteach the concepts these kids don't get it. I'm planning on some one on one time this next week to hopefully address some of their issues.

I was extremely proud of the kiddos during my quilt block perimeter lesson. They turned out some nice paper quilt blocks. I plan to glue them together on some butcher paper for a display piece that the kids can be proud of. 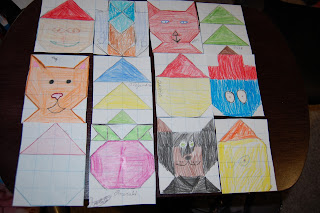 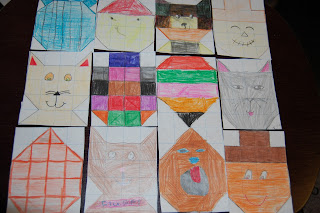 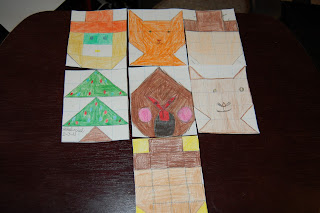 I am particularly fond of the one that looks like an evil beaver with red eyes and red teeth. Turns out it is supposed to be a hamster, according to the artist. The other one I really love is the blue and red one with the funny eyes.

Then last Thursday I had the kids do an area assignment using Cheez-It's as the unit of measurement. The assignment went over really well. They were all engaged in the lesson and excited about the crackers. My TAG student got super excited over my challenge to the class, which was to find out how many crackers it would take to cover their entire paper. For the record the answer is 93.5 Cheez-Its. Only my TAG kiddo figured out, and he was shaking with joy as he brought over his paper to show me the solution he had figured out. I'm very proud of him.


Here are some shots I took of the kids working with their Cheez-Its. I only show their paper and their hands to protect their identities and rights. 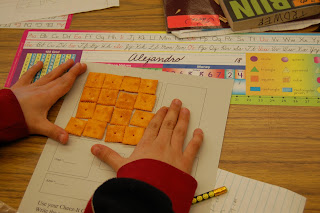 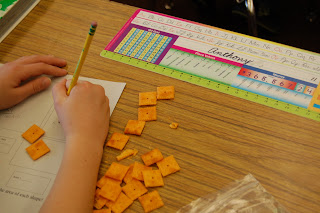 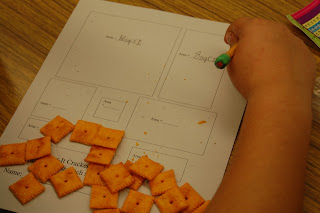 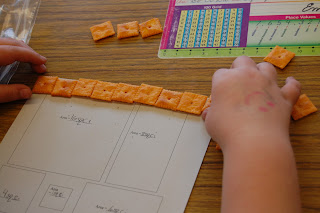 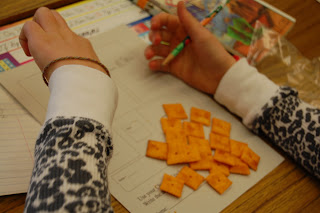 I'm nearly done with my unit and my time in S elementary. I'll miss the kids. I've gotten to know some of them very well, and grown attached to all of them. I've already started going to my new school L elementary. I've started to go there on Fridays, so that I can get to know the group of kids that I will be doing my full time teaching with. These kids are very different from my S elementary kids. The big difference being $$$. L elementary isn't a title one school, so the population and attitudes of the students are very different. More on that later.

I'm really going to miss my S elementary kids. It is something I'll have to get used to though. Growing to love the kids, to know them well. Then letting them go each year. Part of the price of being a teacher I suppose. I know that some of them will come back to see me from time to time. At least I hope they will. I'll want to know that what I did made a difference in their lives. Just like my teachers made a difference in mine. I may not have always gotten along with my previous teachers, but they almost all of them made a positive impact on my life. What more could a teacher hope for?


Take care and be well,
LadyGrace
Posted by LadyGrace at 7:25 PM